I may well be out of my mind, but it’s out of this world!

I may well be out of my mind, but it’s out of this world!
(Mafalda, Quino – paraphrased) 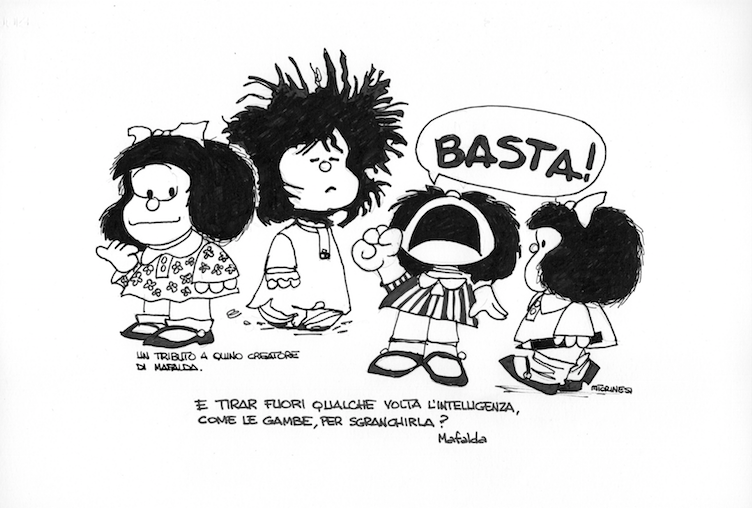 A run of the mill Google search shows how current these three interrelated subject matters are, as well as the number of workshops and special events directly or indirectly dedicated to them.

LinkedIn and Facebook swarm with people, some of whom are also managers and entrepreneurs, posting wise words of advice and quotations on change, innovation and leadership. Easy recipes for within-your-reach success. All you need is the required motivation to follow the pearls of wisdom dispensed with so much apparent enthusiasm.
Of course, mutatis mutandis, we see the same in politics. Vitriolic comments aren’t spared, for example on Facebook, on a range of not exactly brilliant examples of wise words and quotations offered us by our politicians, who behave less and less as public servants and increasingly like wheeler-dealers. In this fantastic Facebook melting pot , which happens to be one of the most important and widespread social media platforms on the Web, everything blends into a kaleidoscope of images, comments, ‘like’s and ‘link’s; personal photos, sport, politics, science (including fake science), provocative images, ‘viral’ videos, quotations and all the usual paraphernalia of the Web. The phenomenon generates new and sometimes inappropriate behaviours and modes of communication masking a fundamental, underlying difficulty in managing relating and relationships, although this is a matter I might write more on soon. As we were saying, it would appear that everybody agrees on a need for change and innovation as well as leadership practices to support the these processes. But is it really so?

These issues are undoubtedly strongly felt and many people are aware of dissonance, for example between what goes on in many companies and the needs expressed by an increasingly complex world. In all this it turns out that there is in fact a strong need for change and real innovation – not only as far as products and technology are concerned, but also in company cultures and procedures – and strong leadership capable of managing a transition from the old to the new, leadership able also to conceive new modes of business organisation and equip itself with new tools for doing and thinking.

I have had personal and direct experiences on various occasions of the difficulties implicit in processes of change and innovation and of the fears these elicit. And so, every so often (fortunately not too often) I am made to understand, always indirectly, that some ideas we put forward are a touch too ‘radical’ and ‘innovative’ and that they could perturb management or some entrepreneur. So much for thinking and acting differently! In response to such objections, more or sometimes less elegantly put (such as when management or an entrepreneur automatically select one of our more orthodox and traditional competitors, thereby preserving their inner peace and sacred – and often dysfunctional – internal equilibriums) we say: stay hidden in a corner waiting for the return of a normality that no longer exists, but in the new normal resisting change will be futile (Seth Godin). Of course, it doesn’t always work and we lose a potential client. On the other hand, however, we don’t expect everyone to like us and experience greater harmony with clients who really do want to change and really do want to innovate.

Despite the fact that everybody’s talking about change and innovation, it’s always someone else’s job! And what’s more: innovate yes, but not too much and certain status quos must be safeguarded even if they are dysfunctional. In both cases, real change and innovation cannot occur. Only a light and gentle retouch that will not influence or affect existing business structures, processes and systems is permitted. Unfortunately, much of what people say about these themes of change and innovation is rhetoric; words and facts aren’t in sync. Thinking, speaking and acting aren’t aligned and thus the speaker and his message aren’t credible. Such a confusion doesn’t work.

It takes a very unusual mind to undertake analysis of the obvious (A.N. Whitehead) otherwise we continue to perpetuate the same, old mechanisms with the results we are already far too familiar with. We need to think about our mindsets (the often unarticulated premises of much reasoning, both organisational and in business) and try putting them to the test. We must, that is, avoid becoming slaves to our own mental schema.

As Martin Luther Kind said: you may not be responsible for the situation you find yourself in, but you will become so if you do nothing to change it. People with authority have a responsibility to act in the best interests of their companies, employees and surrounding communities.

A good leader can engage in a debate frankly and thoroughly, knowing that at the end he and the other side must be closer, and thus emerge stronger. You don’t have that idea when you are arrogant, superficial, and uninformed. (Nelson Mandela). These sentences are steeped in intellectual depth and humanity: humility, focus and profundity, learning and a seeking of awareness – a good work plan for a leader!

Many companies operate as if the future were a linear extension of the present. If business is currently functioning and profitable, they will invest in more of the same technology, the same markets, the same product. It will work tomorrow by virtue of the fact that if it’s working today. No need to exert oneself on new front lines. The reality is that there should be a strategy of making the most of what is and its potential, and also a strategy of exploration of new markets, technologies and products. What recent crises have taught us is that the future is not always a linear extension and that sometimes totally new and unforeseen turns in direction occur and we are immersed in times of great change and absolutely unpredictable outcomes.

The world today is in fact asking for a revolution. This tremendous change must start with those who can create and guide it. A revolution is way bigger than change and this one should start first and foremost with ourselves.
Some of you upon hearing the word ‘revolution’ will have thought of the many revolutions of history, almost all of them ferocious. But other revolutions have had farther reaching and more enduring outcomes: scientific methods, the computer, Internet, new digital technologies, the aeroplane, progress in neuroscience etc.

We could really begin to revolutionise, to change our way of thinking and acting.
In order to do so, we need courage and imagination. We need leaders with vision, who know how to determine our direction, who are able to focus everybody’s energies on an ambitious goal, a goal that is challenging and deserving of the dedication and effort required to reach it, leaders who are leaders because of the passion they know how to convey and the inspiration they instil in others.

These leaders must find the strength and courage to step outside, and IMAGINE WHAT OUT OF THIS WORLD REALITIES WE COULD CREATE. And please, don’t go there alone. Take your people with you.