Searching for a leader…

Searching for a leader… 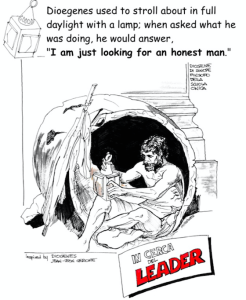 A significant, pervasive dissatisfaction among workers with organizational leadership continues to persist due to factors such as the near-automatic response of blaming others when things go wrong; a devotion to time-killing, distraction and wasteful organizational politics, chronically poor leadership and an ongoing acceptance of sub-criminal psychopaths in leadership roles.

Employees’ leadership needs are not being met across the board. It is, without question, reasonable for followers to expect far better leadership skills and capabilities than those they are experiencing. Poor leadership has consequences affecting the short-term needs and long-term survival of an organisation, stakeholder prosperity, employee turnover, and workers’ physical and mental health. (Bob Emiliani – Speed Leadership. A better Way to Lead in Rapidly Changing Times)

One of the greatest challenges for an organisation to face and overcome if it wishes to continue to exist is that of developing leadership that is suitable for our troubled times.
Many companies, although fortunately not all of them, suffer from a structural lack of leadership that is capable of devising a coherent strategy and vision and of incorporating the skills necessary to take it forward with courage and determination, involving the hearts and minds of employees throughout the leadership process and the various phases of its execution.

Vision without action is simply a dream.
Action without vision is only a pastime.
Vision with action can change the world.
(Joel Barker)

It does indeed seem to be the case that many actions taken, meetings and reports are in actual fact “pastimes” hiding, behind heaps of numbers and graphs and tables, a lack of ideas, a misalignment with often conflicting objectives, and a falling back upon old, familiar, tried and tested tactics which are met favourably with by business structures more interested in their own position and survival than in the good of the company, the clients and the many people working there.

There are various reasons for this absurd state of affairs.

The crazy and short-sighted policies of recent years of indiscriminate cost-cutting and a drastic reduction in serious training and quality personnel have done away with many managers who should instead have formed a new generation of leaders. Some companies have relied on consulting companies who have sent in platoons of fresh graduates, manuals in hand, to identify the cuts to be made on the basis of formulas of “distributed mathematics”.

Other more “evolved” companies (sig!) have got on with things themselves; cutting, spreading and optimising, guided by “savings” plans agreed at head office level, whilst other companies even, the less vigilant ones, have simply shut down.

Other organizations have availed themselves of temporary managers to do the “dirty work”, leaving behind a cemetery of people overwhelmed with work, disaffection, demotivation and processes which, poorly functioning in the first place, are now quite decidedly broken down.

Could things have been done differently? We have no evidence to the fact, but I would say absolutely yes!
Many companies have found themselves in serious difficulty because they haven’t seen and haven’t wanted to see the many “faint indicators” forewarning them of critical situations on the horizon.

Some organizations, having made it through the crisis relatively unscathed, are instead facing a different challenge now of re-creating their management which, deeply anchored in early 20th century models, is comparable to some kind of obsolete technology. In other words, companies are still being managed as they were some thirty or forty years ago, in a world which is today moving at the speed of the Internet.

The inability to question models which led in the past to the success of a company creates a gap between the company itself, its structure (people, roles, procedures, processes and systems) and a market changing unpredictably and at a speed which structures conceptually similar to those of a Napoleonic army, cannot dream of matching. This situation thus creates an ongoing (negative) tension that drains resources, energy, time and money.

These considerations are important when it comes to thinking about our ability to develop new leaders and new leadership models that are right for our times.

People become leaders in the field. Theoretical knowledge is important but it cannot replace the experience gained from carrying out a role of responsibility. The right conditions must be created so that potential leaders can experience a process of growth and have a chance to put themselves to the test.

In the process of learning leadership skills, especially early on, it is fundamental to have models and examples to aspire to, until the potential leader acquires their own style. Forming and consolidating this process of structure-building takes time and experience. It is fundamental that the most expert leaders (mentors or coaches, to use trendy terms) provide constant feedback that can be used to correct, help grow and stimulate. Models and examples can be seen therefore as two fundamental leadership learning tools. But if models are obsolete and examples negative, what type of leader will be produced?

Any organisation intent on growing and prospering financially should set itself a target of creating leadership models that are sustainable and appropriate, so as to create a new generation of leaders to guide the company in the future.
If the analysis is correct, there are two key questions to answer: What types of leadership and process are required for the development new talents?

Answering these two exciting questions can lead to the creation of the conditions necessary for forming a new kind of more modern, agile and innovative company. The most advanced companies in the world are in fact moving in this direction.

Any successful planning of a new organisation will be subject to the ability of the current leadership to imagine new models, processes and work environments and to understand and study what the new business skills of tomorrow will be. But, first and foremost, the current leadership must be capable of questioning its own way of leading the company and of being leaders.

Ed Catmull, founder of Pixar, wrote:
“I believe the best managers acknowledge and make room for what they do not know—not just because humility is a virtue but because until one adopts that mindset, the most striking breakthroughs cannot occur. I believe that managers must loosen the controls, not tighten them. They must accept risk; they must trust the people they work with and strive to clear the path for them; and always, they must pay attention to and engage with anything that creates fear. Moreover, successful leaders embrace the reality that their models may be wrong or incomplete. Only when we admit what we don’t know can we ever hope to learn it.”
(Ed Catmull, Creativity, Inc.: Overcoming the Unseen Forces That Stand in the Way of True Inspiration)

We need to put together a new leadership model which leaves behind industrial revolution style practices and processes, which asks new questions, which sets out to focus and multiply people’s energies and to inspire.

In many organizations people feel quite separate from corporate objectives and problems, rendering them cynical and disinterested in what is incapable leadership focused only on short-term results, incapable of creating new stimuli, incapable of designing new, efficient and effective processes, incapable of developing a vision of the future that garners enthusiasm, engagement and participation.

According to legend, Alexander the Great came to visit the Greek philosopher Diogenes of Sinope. Alexander wanted to fulfil a wish for Diogenes and asked him what he desired. Plutarch provides this version of the story:
Thereupon many statesmen and philosophers came to Alexander with their congratulations, and he expected that Diogenes of Sinope also, who was tarrying in Corinth, would do likewise. But since that philosopher took not the slightest notice of Alexander, and continued to enjoy his leisure in the suburb Craneion, Alexander went in person to see him; and he found him lying in the sun. Diogenes raised himself up a little when he saw so many people coming towards him, and fixed his eyes upon Alexander. And when that monarch addressed him with greetings, and asked if he wanted anything, “Yes,” said Diogenes, “stand a little out of my sun.”
(Wikipedia)

Precisely! What we need most of all is leadership that doesn’t cast shadows.

Have a good week,
Massimo