The Tortoise and the Hare.

The Tortoise and the Hare.

The fact is that after an extremely rapid evolution throughout the first half of the twentieth century, the development of modern managemerial theory and practice has since slowed right down and that, compared to the tremendous velocity of technological, social and geopolitical change, contemporary management appears to have evolved at the speed of an old tortoise. 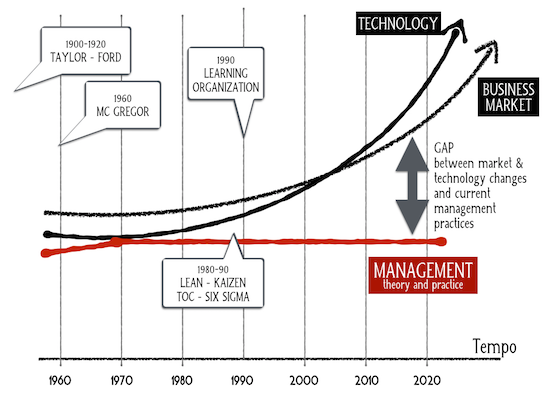 There have been no great innovations in management theories and organisational management practise since 1990. Unlike the exponential take offs in Technology and Business, the above graph gives us a flat line for developments in Management Theory and Practice.
We are in fact managing organisations now as we did back in 1970. There really is no visible difference.
How can we think of continuing to respond to new problems with old, obsolete answers of… a century ago?

RE-THINK! Discovering the Higgs particle in order to transform companies

The problem is in the gap between external business reality and technology, and the internal situation of many companies focused inwards on in-house procedures, power games, the career ambitions of management, the occasionally unfortunate fixations of entrepreneurs and the absurd decisions taken in some headquarters by people whose primary objective is to justify their position in an organigram. 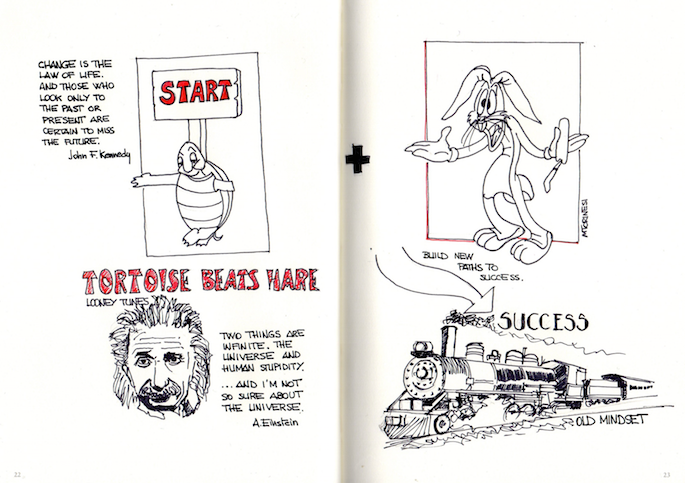 “One day the hare boasted to the other animals: ‘Nobody can go faster than me’, he said,‘I dare anybody to run as I can’. The tortoise with his usual calm said, ‘I accept your challenge’. ‘Now, this is a fine thing!’, exclaimed the hare, bursting into laughter. ‘Don’t brag until you have won’, replied the tortoise, ‘Will you race?’ And so a route was agreed upon and off they went.

The hare shot off like a lightening bolt and was already so far away that he was barely to be seen. He then stopped and, as evidence of his disdain for the tortoise, lay down for a nap.   The tortoise meanwhile walked one step at a time, with some effort, until the hare, upon waking, saw him nearing the finishing line. And so the hare began to run as fast as he could. But it was too late for him to win the race.

The tortoise smiled saying, “No need to rush, just leave on time.” (Wikipedia)

These poignant words should serve as a warning to many hares, but like much of the knowledge derived from wisdom and experience, Wilde’s stinging words to the wise remain unheeded.

Upon finally waking up, the hare breaks into a sprint to catch up. But it is too late. So will it be for those organisations which, used to thinking of themselves are hares, will end up as toast, surpassed by companies which continued to push themselves forward at a regular, measured pace, to an intense and harmonious rhythm.

Inadequate systems, obsolete leadership models and frenzy mistaken for speed all pave the way to disaster. Market aside (it being the ultimate judge of the worth of a company’s products and services), what shows that something is clearly amiss are corporate structures characterised by demotivation, constant agitation, communication problems, chaos and endless emergencies. An apt metaphor for an outmoded management system and the difficulty it experiences in new and unfamiliar environments is an old steam train, blowing out black smoke, endeavouring to manoeuvre its way along a track that no longer has rails because it has become a modern highway.

Surely every medicine is an innovation; and he that will not apply new remedies, must expect new evils; for time is the greatest innovator; and if time of course shall alter things to the worse, and wisdom and counsel shall not alter them to the better, what shall be the end?

We need to realise that we have not got the answers. We do not know exactly what to do and should, first and foremost, have the good sense and humility to admit it. Everyone attempted to tear off God’s beard to try it on (Nicolai Lilin). Yes, we are not God and neither are we omniscient or omnipotent. We must discover solutions and what we find depends, above all, on the questions we ask. We therefore need to create learning companies able to formulate the right questions and manage answers expediently. We need organisations that are open to new experiences, that fully utilise all the resources of their employees, that act and think in new ways as opposed to the old ways still taught on masters courses which, since producing a copy is easier than creating an original, remain stuck in trite and clichéd ‘best practise’.

Organisations need to give their people the right tools. By this I do not mean physical equipment, but intellectual instruments; models for analysis and reasoning that are right for today. We need companies that are open to the world, to exchange and to networks, that have overcome the narrow-mindedness characteristic of auto-referential echelons, that experiment and conduct on-going training in order to generate a constant stream of new ideas, original solutions and new concepts.

Are these dreams? Fantasy? I don’t think so. Take a look at the most innovative companies and you will see that they are in actual fact just like this. Tomorrow’s organisations are going to be operating in an infinitely faster and more complex environment, and are hence moving in this direction; the only one which combines the flexibility, creativity, originality and in-house ‘agility’ demanded by the ever more pressing challenges of the outside world.

Dear Reader, with the patience to read these “pirate-like” writings, do you think speed and complexity are likely to decrease over coming years? That the few will be able to think for the many? That a Taylorism-type division of labour can still work? That the separation between those who think out and those who carry out instructions is still a practice to follow? That the “carrot and stick” theory is still appropriate?

If your answer to all these questions is affirmative, let me politely inform you that your model of thinking is someone outdated, that the period you are living in is not present day. Such ideas might very well have functioned at the outset of the industrial revolution, or during the boom of thirty or forty years ago. It is time to leave the steam engine behind. Understand that we are moving toward hybrid technologies, that the world is moving at the speed of the Internet and no longer at the speed of messages sent by horseback. The Pony Express is nowadays somewhat slow!

And, Dear Reader, if you succeed in embracing the incredible opportunities of a new way of thinking, should you find the courage to act differently, you will have managed something incredible; you will have combined the speed of the hare with the wisdom and profundity of the tortoise, thus becoming truly unbeatable.

Three thoughts to wrap up:

A fail-safe way to remain creative: force yourself to learn something new.
Harvey B. Mackay

The secret is not in the solution, but in the process that has occupied the mind.
Tiziano Terzani

Without deviation, progress is not possible.
Frank Zappa