If your company were a plane, would you fly on it?

If your company were a plane, would you fly on it? 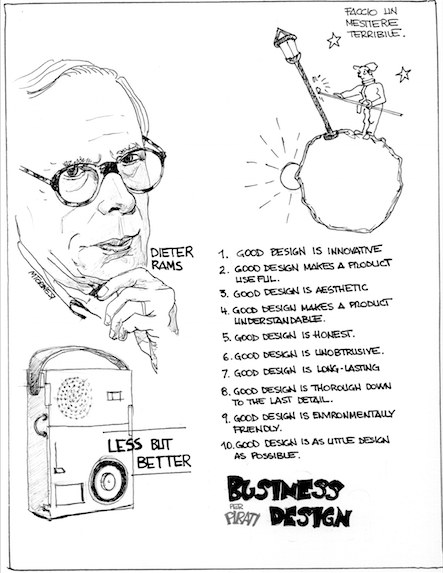 Indifference towards people and the reality in which they live is actually the one and only cardinal sin in design. Function-oriented design is the fruit of intense, comprehensive, patient and contemplative reflection on reality, on life, on the needs, desires and feelings of people.
(Dieter Rams)

Design is not just what it looks like and feels like. Design is how it works.
(Steve Jobs)

Dieter Rams is a renowned designer and head of design for Braun from 1955 to 1995, where he created a range of products, now icons of twentieth century design, some of which are on display at the MoMA, New York. Rams and his team extended the evolution of product philosophy begun by Braun’s founder, Max Braun.

The seventeen-strong group of designers Rams headed was not large but the people in it worked as a team in an atmosphere akin to a “college workshop”.

Although Rams was the boss, remembers Lubs, everyone else had a voice. The studio appears to have been rather like a college workshop. ‘If Dieter did not like something, he would say, “Is that good?” or “Do you think it is finished?”, ‘ he recalls. ‘After work the team socialized together as well,’ he adds, ‘bringing along their girlfriends, going out for drinks, to listen to jazz, celebrating birthdays together… The company had a hierarchy but it was also open house. There was constant discussion, taking and giving, we were all filled with the same goal.’ (Sophie Lovell)

A truly innovative and creative group, they designed many successful products: over the years at Braun, Dieter Rams’ team developed around 1,000 new products. Some of the operational features of this group of designers stand out for their relevancy today: their shared method of work, aligned values and objectives and organised social events all surely built and increased cohesion between team members. In fact, a team is not built only during games but, above all, when in training and in the locker room.

Another interesting feature of Dieter Rams’ work is the length of his stay in his role as Braun’s head of design. Gillette purchased Braun in 1967, but Rams managed to maintain the integrity of his design philosophy, which had always been so unique to his work and division:

Apart from his own design work, this is the second greatest achievement of Dieter Rams: establishing a design department within a company, which succeeded for decades in preserving its own individual approach and rigorously advancing it, without really being influenced by changing market interest.

In other works, Rams succeeded in convincing senior management, which changed about every two years, of the validity of his ideas and to not succumbing to the temptation of choosing short-term product designs.

In short, Rams’ was a successful career, with an important company, developing an entire range of products which are now famous and all this he achieved without renouncing the core principles which inspired his work as a designer and the work of his team. Here are great lessons in design, innovation and managerial ability, to study carefully, in stark contrast to the many current images of managers and gurus held up as examples and whose success turns out to be ephemeral.

Other great lesson here concern Rams’ ability to create a structure in which a group of creatives really made the difference over a very significant period of time. Similarities to Steve Jobs’ Apple are immediate.   Sometimes, we think such companies are the fruit of some magic recipe when they are, instead, the result of the long, hard and tiring work of individuals on methods, of the construction of a philosophy (laws and values) that is shared and “interpreted” in the day-to-day and of the careful management of interpersonal relationships. Deiter Rams also always got on well with the technical people in Braun, this ongoing collaboration becoming the reason behind Braun’s market success.

Dieter Rams had Ten Principles for Good Design which, in addition to being relevant to the design of new products, I would like to extend to the idea of the “design” of a company that knows how to evolve:

Internal organisations, like the actual business activities of a company, can and should be planned not according to rigid schemes, but bearing in mind the characteristics of the company, its market, processes, products and vision of what will be needed tomorrow. Not starting from past choices or systems which look back to yesterday or, worse still, to power centres. Only with this type of planning can company structure be a foundation for sustainable and lasting growth. A healthy company should periodically ask itself it its structure is right or if it requires changing.

If your company were a plane, would you fly on it? Judging by how certain companies manage their planes and flights, it would be better to remain on the ground, and yet… and yet we can improve things and take off.

The fifth planet was very strange. There was just enough room on it for a street lamp and a lamplighter. The little prince was not able to reach any explanation of the use of a street lamp and a lamplighter, somewhere in the heavens, on a planet which had no people, and not one house.
(…)
When he arrived on the planet he respectfully saluted the lamplighter.
“Good morning. Why have you just put out your lamp?”
“Those are the orders,” replied the lamplighter. “Good morning.”
“What are the orders?”
“The orders are that I put out my lamp. Good evening.”
And he lighted his lamp again.
“But why have you just lighted it again?”
“Those are the orders,” replied the lamplighter.
“I do not understand,” said the little prince.
“There is nothing to understand,” said the lamplighter. “Orders are orders. Good morning.”
And he put out his lamp.
Then he mopped his forehead with a handkerchief decorated with red squares.
“I follow a terrible profession. In the old days it was reasonable. I put the lamp out in the morning, and in the evening I lighted it again. I had the rest of the day for relaxation and the rest of the night for sleep.”
“And the orders have been changed since that time?”
“The orders have not been changed,” said the lamplighter. “That is the tragedy! From year to year the planet has turned more rapidly and the orders have not been changed!”
“Then what?” asked the little prince.
“Then the planet now makes a complete turn every minute, and I no longer have a single second for repose. Once every minute I have to light my lamp and put it out!”
(The Little Prince – Antoine de Saint-Exupery)

I find this extract from The Little Prince very sad. Some people cite it as an example of perseverance, which strikes me as an appalling and disheartening idiocy: If orders haven’t changed but the world has, let’s change the orders.