It’s a dangerous business going out your door. (J.R. Tolkien)

It’s a dangerous business going out your door. (J.R. Tolkien)

Leadership and learning are indispensable to each other.
J.F. Kennedy

The world needs leaders with vision instead of leaders in television.
Lech Walesa

We have just finished an intensive workshop on Lean Leadership with Bob Emiliani during which managers and entrepreneurs reflected on the abilities leaders need to develop in today’s difficult and complex contexts and markets.

Bob is an original and innovative thinker. He has been speaking about Lean for many years and his way is very similar to our vision; that is to say, combining continuous improvement with respect for people. This approach Bob calls ‘Real Lean’, as opposed to ‘Fake Lean’ which looks only at improvement (tools) and omits people and which, eventually, translates just either into cosmetic change or redundancies. 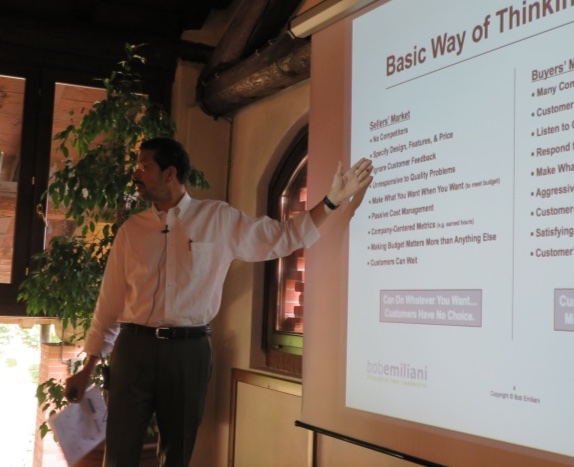 A focus on people has been popular for some time now, since other consultancy companies cottoned on to the fact that something was missing in their partial application of Lean and so, in some way, added this element to their repertoire. Now that we have spoken about leadership, I am sure that this other fundamental element will also be somehow catered for. What actual content or meaning these ‘experts’ will want or be able to offer, is a whole different matter.
Bob was one of the first, if not the first, to speak about Lean Leadership many years ago and many people have referred to his work without citing the source, the origin or its original presentation.

‘Lean Transformation’ success cases have been very few. Usually it is partially implemented, restricted to manufacturing environments and, in the most advanced cases, rolled out to product development. There are rare cases in which Lean has been used as a management system. The current popular version of Lean interprets it as a production activity and so in production it remains, confined by people who do not understand its spirit or potential.

It is an interesting case of “confirmation bias”: Confirmation bias is a cognitive phenomenon people succumb to. It is a mental process consisting of the search, selection and interpretation of information in such a way as to focus more attention, and thus attribute greater credibility, to information which supports one’s own convictions or hypotheses, and by the same token, ignores or minimises information that contradicts them. The phenomenon is greater in contexts where subject matter stirs strong emotion and where deeply held beliefs are touched upon. (Wikipedia)

Changing a company’s management style is too tiring an effort: it is easier to interpret Lean as concerning production so as to avoid changes to management practices, which go too deep.

The reasons for such resistance, typical of entrepreneurs or managers, are varied. Some of them we can list:

The outcome of all of the above is in fact an image of a facade (Fake Learn), which produces disaffection and demotivation, reducing everything to the following of procedures, which have lost meaning.   And let’s not talk about what happens if, as a result of such misplaced effort, everything winds up in redundancies and plant closures etc.
I have also recently that audits to assess the degree of Lean application within companies have begun in some business areas. If things weren’t so tragic, it would be amusing. Lean as an ISO procedure! History repeats itself!

Bob and I agree on the idea that the management system underlying Lean is something deeper and more fundamental than a simple deployment of a drawer of tools and the use of images (not even all that inspiring) with a variable number of columns.

I personally maintain that a certain vision of Lean is now obsolete and that never, put forward as it is, will it be able to genuinely function or influence an entire organisation. I believe that attempting to mimic Toyota’s procedures and techniques is a mistake. It doesn’t work. Just as any system that looks to ‘best practices’ and not at ‘next practices’ is a wrong one.

The objective should be to develop one’s own system, one’s own way of organising, with proven experience and techniques as one’s starting point, which can then be adapted and evolve according to the particular circumstances of the business.

Bob and I agree on continuous research into new models and systems and on the application of continuous self-improvement, taking it to new levels of thought and action.

Deep change stems from an awareness of an organisation’s strengths and weaknesses and from the formulation of a profound vision towards which one directs everybody’s efforts.

In Italy we suffer, among other things, from a serious cultural problem: seeing companies from an archaic and obsolete perspective.

Still now, in 2015, training our people is seen as a reward for good behaviour. Training is not seen as a strategy for competency, as a strategy of benefit first and foremost to the organisation itself, as creating conditions for the development of ideas, products and services which are, moving forward, going to have to be ever more innovative. Executive expenses, travel, company cars, the purchase of under-utilised machinery, hugely expensive software, and meetings often account for a bigger portion of budget expenditure than investment in training.

Poorly structured procedures created by people who don’t understand how things really work, and sometimes devised for problems which have since disappeared, block operability. People are forced into slowness and inefficiencies that drain time and energy.

Frequently self-referential and frightened leadership blocks the changes necessary to the very interests of the organisation.

Here is what needs to be done for radical change:

This is an invitation, a message, a burning issue and no longer a requirement that can be put off. If we want development that it enduring, we must find new models and new departure points. If we want success, we must create new styles of leadership. If we want to discover our vision and our mission, we must attempt to think and behave differently.

Sometimes it is dangerous leaving your front door. But it’s a risk worth taking, if we want to move ahead as leaders and enable our people and organisations to advance.

Have a good week.
Massimo