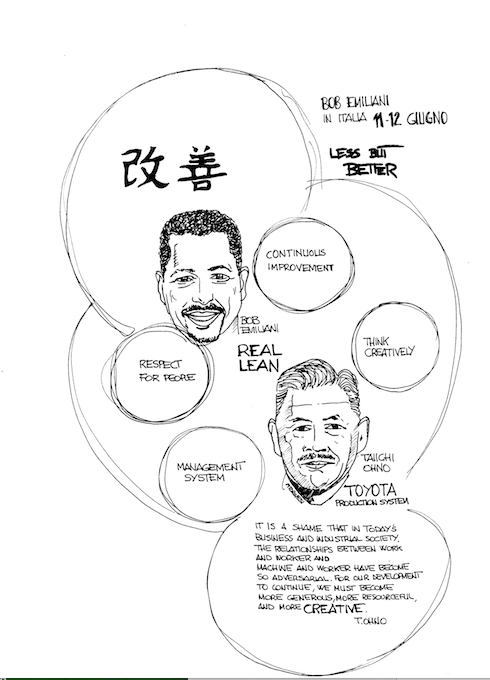 This week, we have the pleasure and the honor of having BOB EMILIANI on our blog with The spirit of Lean, that you find at the end of my introduction.

Resistance to a new idea is proportional to the square of its importance.
Bertrand Russel

(…)The most important objective of the Toyota system has been to increase production efficiency by consistently and thoroughly eliminating waste. This concept and the equally important respect for humanity that has passed down from the venerable Toyoda Sakichi (1867-1930), founder of the company and master of inventions, to his son Toyoda Kiichiro (1894-1952), Toyota Motor Company’s first president and father of the Japanese passenger car, are the foundation of the Toyota production system.

(…)The Toyota production system, however, is not just a production system. I am confidenti it will reveal its strenghts as a management system adapted to today’s era of global markets and high-level computerized information system.
(Taiichi Ohno : Toyota Production System. Beyond large-scale production)

For us at Heiko Xplore, June will be dedicated to a series of very special activities in order to bring-back to Italian managers and entrepreneurs the philosophy and deep wisdom of continuous improving, principles that, in the trivialisation they are subject to, were lost, buried by instruments, methodologies, best practices that, even allowing for some local effectiveness, completely failed in building new strategies, in deeply changing the enterprises, in changing obsolete management models and in engaging in a structured and effective way.

Of course, what is important is not the system but the creativity of human beings who select and interpret the information, wrote Taiichi Ohno in the last page of the book quoted above. Western people selected and interpreted only what they where able to see and understand and that was more useful, failing in building a really new way of managing business, because it is well known that “the others” are the ones that need to change.
So we have “systems”, usually depicted as temples with a variable number of columns, the “tools”, to be applied not in a rigorous, but in an almost religious, way, having, in fact, the calm self assurance of a rite, always granting results, but that do not touch calm certainty of the manager or of the entrepreneur that is certain to have applied the right recipe respecting rules and procedures in force. And so “business as usual” …

Some time ago in – Lean, Toyota and the quest for the Holy Grail (July 2014) – we wrote about the origin of the word “Lean”, used successfully by an American to indicate the “make more with less” principle. Forgetting semantics, it is important not to forget that behind so many “lean” tools and the so-called “lean thinking”, which became popular thanks to a book again written by American professors, there is the kaizen philosophy, i.e. “to change to improve”, basic foundation of the Toyota system and of the Taiichi Ohno’s tough.
This philosophy, deeply rooted into the Japanese mentality (think about fine arts, seen mainly as a personal growth instrument) and transmitted in Edward Deming’s teaching, is also today absolutely valid and essential for every organization that wants to improve products, processes or services. And it also remains valid at a personal level to improve himself/herself, his/her performance (for instance an athlete or an artist) or his/her skills and competences. In its essence, “kaizen” means “to change a thing to improve it”, and from this simple but intense meaning derives a fundamental truthfulness and pragmatism enabling it to become a basic principle applicable to each human activity.
Many time, we wrote that be believe in design, in the ability to design products, services, organizations, strategies that can make the world a better place; isn’t also this “kaizen”? An approach based on improving as evolutionary concept that can be used for every thing or activity. This is the link between kaizen and design, between business design and another principle, kaikaku – radical change. Design is creativity with strategy and it is enough to visit the Toyota website to understand the importance given to design.

Finally we want to remember that many of the so-called “lean transformations” sadly ended up in redundancies and personnel reductions whit devastating effects on people and in this case we are in complete agreement with Bob Emiliani, very well known “lean thinker”. For this reason, in June one of the first initiatives to re-focus on improvement principles will see Bob as a guest. Titles of some of his books clarify our communality of vision: Better thinking, better results, Lean Leadership, Real Lean, Kaizen heart and mind. And from here we start, hosting Bob on our blog, with a short essay titled The spirit of Lean.

My mind has a tendency to crystallize and so I renew my determination every day to force myself to think creatively, the wise words of Taiichi Ohno show us a way, not easy but … possible!

BOB EMILIANI – The Spirit of Lean
This entry was posted in Real Lean v. Fake Lean, Time Machine on October 31, 2013.

When I hear about the Lean transformations going on at companies today, both large and small, I find they are quite different compared to what I experienced nearly 20 years ago.
Back then, our Lean transformation was based on the simple ideas of:

We had energy. We had spirit. Our focus was on quickly understanding the problem and making significant improvements. The only charts we made were the charts related to kaizen and the work actually going on in the cells.

Now, I see bureaucratized micromanagement of Lean activities. I cringe when I hear of companies that:

What is happening here? Leaders are merging non-Lean and Lean ways of thinking and doing things. Lean is force-fit into existing leadership routines and management practice, thereby greatly reducing the power of Lean. Making Lean fit into existing leadership routines and management practice kills the spirit of Lean, and, consequently, greatly slows down the Lean transformation. It should not be so hard to understand that.

Lean is perhaps the one and only chance an organization has to replace current leadership routines and management practice. But this is not happening, except in a few cases. Leaders who posses Lean intelligence recognize this great opportunity and act  on it. They prefer the simple approach to Lean transformation: do it, do it right, do it every day, and improve how you do it.

They are driven to test the limits of truth and understanding by paying attention to both process details and people details. They generate and transmit the spirit of Lean and create widespread enthusiasm. They make Lean fun, and by doing so they make work fun. That’s how you transform an organization.