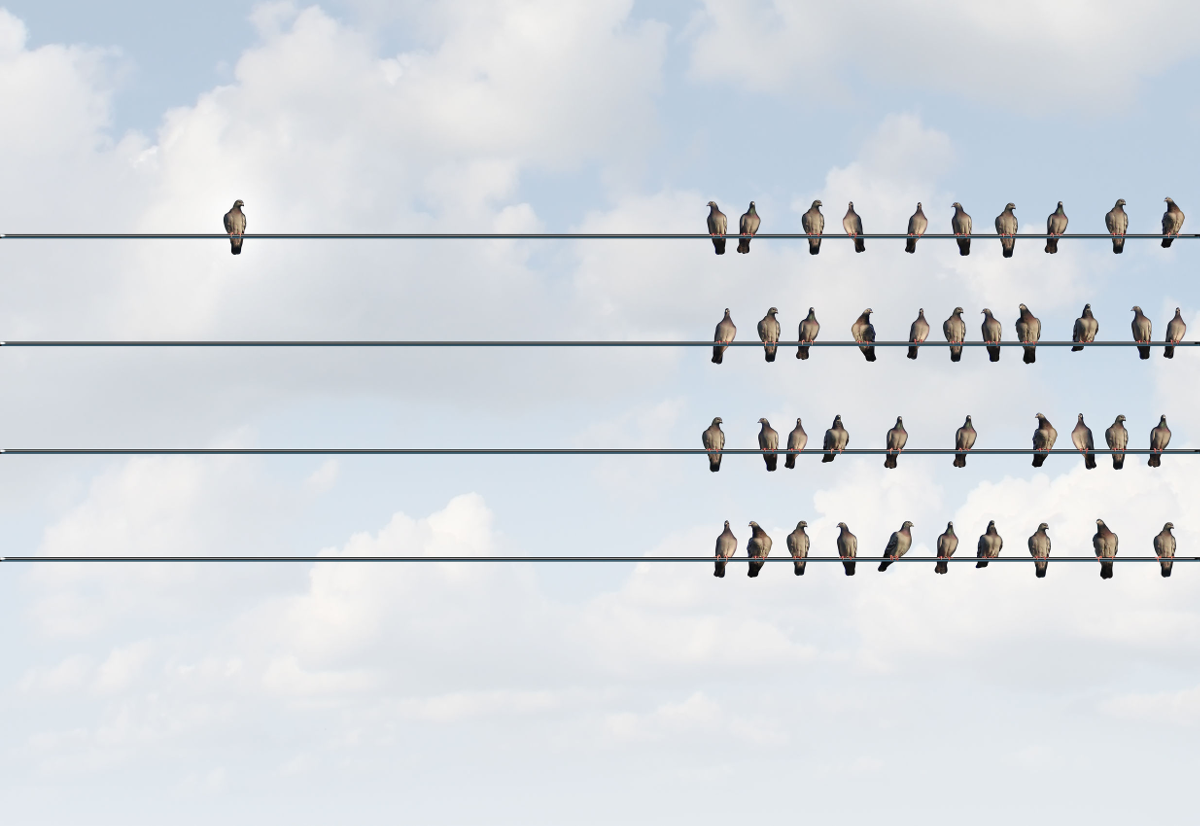 It is our honour and pleasure this week to publish a “piece” written by Jaap Suermondt, Vice President of Hewlett Packard Enterprise Software, in Palo Alto.

Thanks Jaap for your contribution.
And to you, friends and followers, happy reading..


About gold rushers, harvesters, and contrarians

One of the challenges that every aspiring entrepreneur, R&D or product manager, researcher, innovator, doctoral student or professor will face at some point is whether to focus on what is already hot and popular, wait it out until new technologies or methods are more proven and established, or go in a different direction from where everyone else is going.

Even here in my home, California’s Silicon Valley, there is a fair amount of herd behavior. We see people joining the next gold rush in the perceived entrepreneurial safety of the company of others who believe speed is of the essence and under the assumption that if it’s popular/hot, it must be right. They essentially crowd source their inspiration, and are latching on to what is currently perceived to be the next big thing, the next inevitability. In research and development, it tends to be easier to get corporate, venture capital, and public funding for established emerging technologies (somewhat of an oxymoron, but you probably know what I mean). Analysts and technical publications are writing about them. Conferences emerge about them. Government agencies establish requests for proposals and grant money, and customers (and boards, for that matter) are asking what you are doing about them, even though it may not be entirely clear what these developments actually mean in terms of return on investment for their business. The gold rush effect is exacerbated by the fact that everyone is afraid of missing the next big thing [internet / mobility / big data / IOT], and an avalanche of investment results. And winners emerge – sometimes the inventors and first movers, sometimes others who didn’t come up with the original concept but who were simply faster, or offered a better user experience, a more complete ecosystem, or just a better channel, supply chain, or go-to-market. Or who just got lucky.

But sometimes the winners are among those who have no interest in jumping in the middle of what the herd is doing. Among these, there are two camps – the contrarians and the harvesters. Both types aim, like Chaucer’s kyte in The Knight’s Tale, to baar awey the boon bitwixe hem bothe.

The harvesters don’t care whether the herd is right or wrong – they simply go to the areas just passed by the herd, and search out the true value in the area that is now no longer of direct interest to the gold rushers. They are willing to wait it out, and let the stampede play out without getting in the middle of it. A leading industry analyst firm refers to this as the slope of enlightenment leading to the plateau of productivity. And there can be discovery there as well. A friend in bioinformatics told me about some very interesting medical discoveries that came about that way – not by those who did the hard work of collecting the data (“gold rushers”) as part of funded research studies, but by others who later “harvested” and analyzed the data sets after publication. The original recipients of research grants published their carefully gathered data as part of the early results of those studies, but because they were rushing towards the next vein of gold, left the data sets only partially explored – and at the time of publication there were loads of rich but as of yet undiscovered meaningful and novel phenomena, now ripe for discovery by others.

The contrarians, on the other hand, do care – but they ask themselves: What if the herd is wrong? And then they pursue an innovation or R&D strategy that carves out a niche that (if successful) has the advantage of greatly reduced competition or at least a time advantage. Clearly this is risky, both financially (can we get and maintain funding for something that assumes everyone else is going the wrong direction?) and in terms of stamina – when do you admit that perhaps the herd was right after all? Or if the herd decides you were right and turns towards you, can you actually outrun them and maintain your early advantage? But the successful contrarians become the early leaders in the next gold rush. And being a contrarian can be both intellectually stimulating and a lot of fun.

OK, so that’s all fine and good. But regardless of whether you want to join a gold rush or just sell shovels and train tickets to those heading into the mountains, it’s useful to be able to recognize one when you see one (perhaps even predict one). And I have just the one for you.

It’s Moore’s Law, and more specifically, the end of it.

Moore’s Law is one of the driving forces of Silicon Valley and the tech industry. As originally formulated, it characterizes the exponential growth of the number of transistors on an integrated circuit. But it is commonly bastardized into numerous corollaries that basically state that everything in tech gets twice as powerful and/or at half the size and cost every 18 months. And for fifty years, that has basically been true.

For most of those fifty years, pessimists have claimed that Moore’s Law was physically impossible to sustain and was therefore going to come to an end soon (for some version of “soon”), if it had not already. They point to physics (can’t get much smaller or the electrons start to misbehave), or to history and economics (exponential economic growth has always come to an end). And I have to give it to the pessimists – this time they actually seem to be right that we have a problem. Recent evidence shows some of the curves starting to flatten out (and some of the cost or energy curves actually going in the wrong direction) and some of the tic-toc release cycles starting to slow down. And a search for “end of Moore’s Law” returns 1.4M results, including from respectable sources ranging from the MIT Technology Review to The Economist. Physics is finally getting in the way (as it tends to do when you violate its laws), and it looks like transistors (and features in microprocessors and integrated circuits) are getting very close to as small as they can physically possibly ever get.

But optimists have claimed that another miracle would happen (also “soon”) that would continue it for another cycle or two, or for the very optimistic, forever, or that they have already made it happen. They point to biology (look at the number of features in the brain, we still have a long way to go), and also to physics (we are only utilizing the mechanical features we have been familiar with, and we are using too many electrons and not enough photons), or even geometry (we are only use two dimensions so far, just going to three will give us a long way up). And again there’s history – engineers have been proving the optimists right for all of those fifty years.

And you may ask yourself: So what? Who cares about hardware? Move your workloads to the cloud, or buy it as a service, and stop worrying about the size of the chip or server or rack or the data center that it runs in. Your cloud service provider will tie more and more processors and DIMMs together by copper wire into racks and clusters, scale out, and just build more dams to feed the clusters…

So that really is the existential issue we now face – that the goose that lays the golden eggs is in trouble, a goose that has been a major force in our economy for decades, and that has had an extraordinary impact on every technological device we use, and in general on how we live, work, collect and process all information, interact with our friends, consume news and other information, and practice business.

The last few gold rushes in this valley have ignored this conundrum: today the attention is on self-driving cars; yesterday it was virtual and augmented reality, as well as the disruption to the taxi and hotel industries; the day before that it was the emergence of social networks and smart phones; and just before that it was search and the disruption of the music and movie industries.

And all the while, Moore’s Law kept tic-tocking away. Until now.

It seems like a new gold rush is inevitable.

Perhaps I’ll be contrarian about it.

Or just wait until the engineers sort it out. They always have.

If Innovating means doing what is new; altering the established order of things (in order to achieve new things), then Jaap’s idea and his delightful image of a “contrarian” as someone who goes against or rejects popular opinion, really resonate with me. Many “gold hunters”, who frequently follow fashions and trends most in vogue (including in tech), end up like metors disappearing off into space. I do however feel sympathetic towards “collectors, for their perseverence and intellectual acuity.

“Collectors” are a tad crazy and it is to them that I dedicate these clsoing sentences::
Here’s to the crazy ones. The misfits. The rebels. The troublemakers. The round pegs in the square holes. The ones who see things differently. They’re not fond of rules. And they have no respect for the status quo.

You can quote them, disagree with them, glorify or vilify them. About the only thing you can’t do is ignore them.
Because they change things.
They push the human race forward. And while some may see them as the crazy ones, we see genius. Because the people who are crazy enough to think they can change the world, are the ones who do. (Steve Jobs – Think Different)

No problem can be solved by putting it on ice