Toyota Setsuna: Design, imagination and visions of the future.

Toyota Setsuna: Design, imagination and visions of the future. 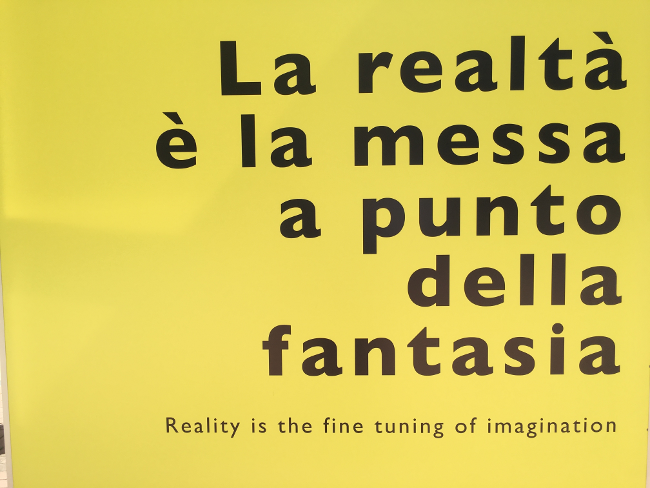 Toyota introduces its new concept car, the Setsuna, at the Milan Design Week.

ECO ROADSTER – Called the Setsuna (meaning “moment” in Japanese, since this car is made of a material designed to change over time) it is an eco-roadster, electric drive, made almost entirely of wood and in some ways reminiscent of the motorboats of the 60s. The prototype is intended to highlight the gradual transformation of the car of the future which “with the passage of time will absorb the aspirations and memories of the people and families that will use it.” The choice of name, as Toyota points out in a note, is intended to remind us of ”the special and fleeting moments people experience with their vehicle, periods of time which will render the car irreplaceable for its owners.”

SNAP-FIT WOOD – In order to get their concept across, Toyota has chosen a range of wood types for the various vehicle parts, including exterior panels, the flooring and seats. Wood – underlines Toyota’s statement – possesses a unique charm and characteristics which cannot be found in conventional materials. ‘The wood will last many generations if well cared for and changes colour and consistency in response to the environment, especially temperature, humidity and operating conditions, assuming a unique character and depth of its own”. Setsuna’s wooden parts were assembled using a special technique relying on joints, thus steering clear of screws or nails, with particular attention given to size (it is just 3 metres long and 1.5 metres wide) and the furnishing of the twin passenger space. ”We evaluated various ways to express our concept – said Kenji Tsuji, the Toyota engineer who oversaw the development of Setsuna – selecting a variety of wood for specific applications, such as Japanese cedar for the exterior panels and Japanese birch for the frame planks.” There are just a few standard accessories, one of which is a clock with a calendar programmed to mark the passing of 100 years.
(Tuttosport.com – Toyota Setusuna, electric prototype wood. – March 16, 2016)

Setsuna is a concept car; a vehicle not intended for production. It is a prototype used to express a concept, an idea. 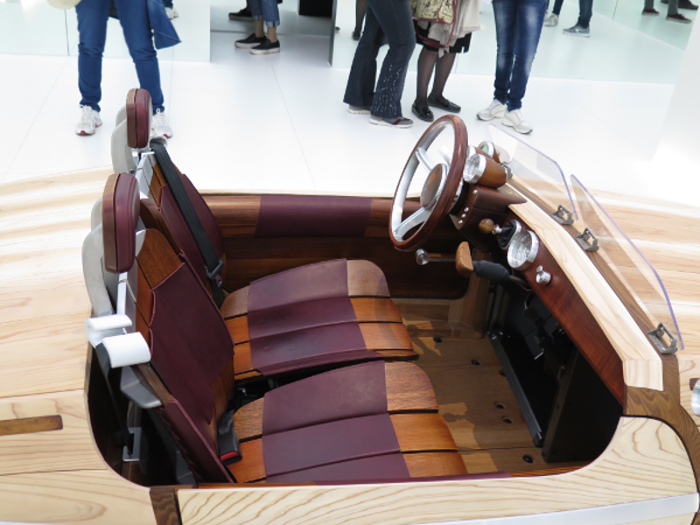 The car is made of 86 hand-made, wooden panels, each of which will change with the passing of time. When it becomes necessary to carry out any repairs, the individual panels will be able to be replaced. Looking at the panels thus repaired, you will see traces of the work carried out by hand and experience memories of the past.
The designer, Kenji Tsuji, has used the ancient technique of Japanese master carpenters, okuriari and kusabi, meaning the panels have been installed without nails, screws or glue, but using various types of joints, according to the ancient Japanese technique used to construct wooden Buddhist temples. 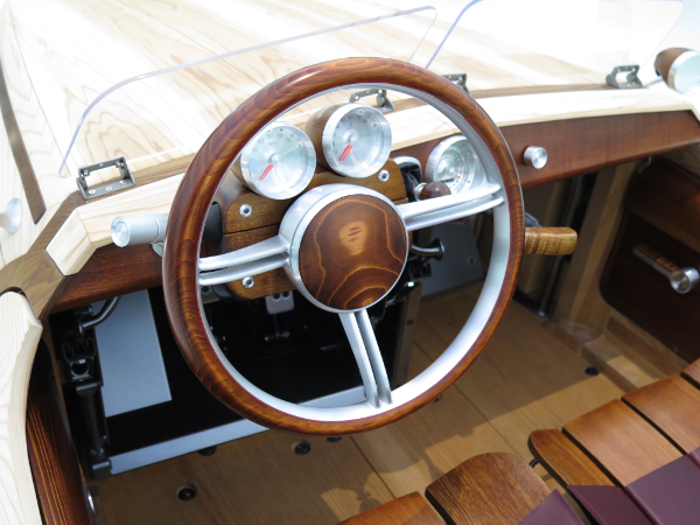 Another very special feature is the clock with three time count levels: hours, days and years, for up to 100 years.
I will not dwell on descriptions because excellent ones can be found online simply by typing the name of the concept car.

The Toyota Setsuna casts my mind back to another famous concept car: the BMW Gina, by Chris Bangle, the BMW designer I have had the pleasure and the honor of meeting.
The BMW Gina concept car was designed as a prototype to test new and original ideas: characterized by a body made out of a special stretch fabric and covered with waterproof leather resistant to heat and cold on a mobile structure driven by servo-operated mechanisms. This structure allows the Gina to change shape, aerodynamics adapting to driving conditions. The materials are also damp-resistant. Derived from the design for the BMW Z4, the Gina consists of a single skeleton, for both structure and design purposes. The outer body is made up of just four elements. (…) The lights are integrated into the bodywork so as not to violate the overall design and when they come on, their light is filtered through a layer of translucent film.
The car’s name is an acronym for Geometry and function In “N” Adaptations, where “n” is a mathematical symbol standing for a generic natural number: as if to say that there is an undefined number of adaptations.
(Wikipedia)
I remember hearing Chris Bangle saying how he had made designers pick their brains in order to “challenge existing principles and conventional processes.”

There is much talk of the Toyota Production System (TPS) at this time and it is creating a great deal of confusion (see my March 6, 2016 post, Lean + something) with many people referring to lean (sometimes rightly, sometimes mistakenly) and to operational excellence etc., etc. Meanwhile, little or no attention is being given to the innovation side of Toyota (and obviously, Toyota is not alone, having just noted BMW’s example) and to the significant amount of attention the car-maker pays to design, of which Setsuna is a concrete and practical demonstration. This is an often-overlooked example of how, in addition to efficiency, a company should also pursue innovation at its various levels.
Design and innovation thus are and will be the challenges – present and future – and territories, into which companies must extend themselves, going beyond the pursuit of easy and pointless propositions.
Thinking about the slow pace at which many companies are waking up to how the world is changing, the words of Stanislaw Jerzy Lec spring to mind: Men have slow reflexes; generally they understand things only in subsequent generations (I apologize to entrepreneurs and managers for this slight provocation, but it is also an invitation to learn and train fast reflexes in your organizations; which you can do, but you must get a move on).
If the Milan Design Week has demonstrated one thing (in case we ever need further confirmation) it is that the world is evolving at an incredible rate and in fascinating new directions.

The more a machine itself is perfected the more hidden it is behind its role. It seems almost that every man’s industrial effort, all those calculations, those sleepless nights of design and layouts, have no purpose other than extreme simplification; as if it took the experience of generations to gradually free the contour of a column, of a hull or the fuselage of an airplane, to reach the elemental purity of the curve of a shoulder, or a breast. It seems that the work of engineers, designers and technicians is reduced to an incessant grinding and clearing away to lighten that wing, balance that fitting, so as to loose one’s way, until it will no longer be a wing attached to a fuselage but a perfectly shaped simple form, freed from its wrapper, a spontaneous assembly mysteriously bound together, made from the same nature as a poem. Perfection can be said to be achieved not when there is nothing more to add, but when there is nothing left to take away. At the peak of its evolution, the machine is concealed.
(Antoine de Saint-Exupery, Wind, Sand and Stars)

The perfection of the essential is what characterises great design, whether by Toyota with its Setsuna, BMW with Gina, by Steve Jobs or by Dieter Rams (less but better), or by those ancient Japanese master carpenters or the carpenters who preserve wooden temples built 1,000 years ago, taking them down and repairing them by hand (some temples have a “scheduled maintenance” every 100 years) according to the precepts of an ancient art.
Okuriari and kusabi, slots and joints built with incredible expertise, creating junctions of time resistant to wear and, in Japan, resistent even to the wrath of earthquakes, created by skilled hands, by teachers who design and plan the work as designers.

Perfection as elimination: that is, when there is nothing left to take away.

Simplification means trying to solve a problem by eliminating everything that does not support functionality. Simplifying means reducing costs, decreasing production time, assembly and finishing. It means solving two problems together in a single solution. Simplification is a difficult job and requires a lot of creativity.
Complicating is much easier.
(Bruno Munari – One Thing Leads to Another)

Why do we often do the opposite? Why do we complicate?
We design complicated products and services; we create organizations which obstruct instead of helping; invent processes that do not work and we do not care about who is obliged to use such products/services/ processes/organizations to live and work?
Full of nails, screws and glue?

We should overcome limits instead of living within their confines, thinking we cannot go beyond them.

Get close to the limit, and … design a better world.

Have a good week,
Massimo